As a nerd/geek (Neek? Gerd? Isn\’t it time we merged these two erroneous terms and unite! I mean can\’t we, as a people…) I have been frequently intrigued by miniatures and wargaming. My hobbit intuition, modest means, and sensible wife (\”No honey, don\’t buy those Space Marines\”) have kept me out of that market. I was even able to resist the pull of X-Wing. Let\’s just face the facts: those minis are gorgeous and the game seems really cool. But, no, I don\’t have the space to accommodate all those ships and $15 is a lot for a plastic Slave I. If I\’m not going to assemble and paint a horde of Orks, then I am not going in for the Battle of Yavin. Besides, I\’m busy collecting my Outlands army.

The real truth, though, is that my interest in Star Wars has just waned over the years. When I was a kid I was pretty much obsessed. I would watch the (holy) trilogy monthly, well into my late teens. But I haven\’t seen those movies in years and, well, I still love them but that love is laid dormant. In short, it just wasn\’t all that hard to resist.

I hadn\’t thought this through at the time, so imagine my personal surprise when I heard about a little game called Attack Wing. Out of my mouth came a barrage of meme and 30 Rock quotes. You mean, I can play X-Wing but with ships from…Star Trek?! 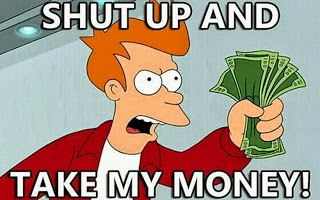 No, no. Now now, we\’ve had this conversation before, brain. It\’s too expensive and you\’re gaming habit is getting out of control. You don\’t need those ships…those pretty, pretty ships…Stay with me, man. They\’re not as high quality minis as X-Wing anyways. I mean that Enterprise D looks…it\’s just…wonderful. Shake it off. You\’ve not even gotten to the Dominion Wars in DS9 yet, so…Gor Portas…I don\’t know what that is, but I must have it!

Luckily I am sensible enough to not go into unnecessary debt over games…pretty, pretty ships…so I haven\’t actually picked up Attack Wing yet. But I will! And that\’s my point: licenses are so very powerful in selling stuff. Even amongst my 8th grade students, half of their backpacks are licensed characters. I was once foolish enough to scoff at Adventure Time thermoses (thermi?) and Avengers sneakers, but then I realized I do the exact same thing. 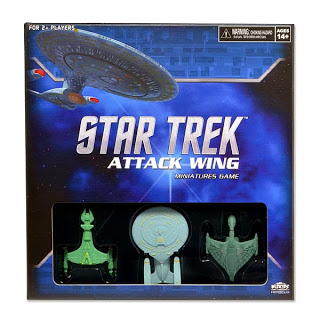 Why do I play the Lord of the Rings card game over other games? While there are valid reasons by virtue of the game itself, I probably would not have bothered to give it so much as a sniff if Gandalf weren\’t on the box.

Why should I play Attack Wing while there are probably better space combat games out there (with finer game pieces)? Because I freaking love Star Trek!

So it\’s no wonder that there are so many games and other products with licensed characters and logos: they comfort us, remind us of our \”friends\” (those characters we so come to love through shows and movies and books). This is, of course, no snub to the properties in question. Star Trek is no slouch in their design and world — the ships match the coolness factor of any other science fiction property out there. And if the products weren\’t good, only hardcore fanboys and collectors would pick them up. And yet it remains true, the familiarity of worlds we already know and love can go a long way in putting those creeping fingers into our wallets. Now when is the next competitive season of Attack Wing happening?!