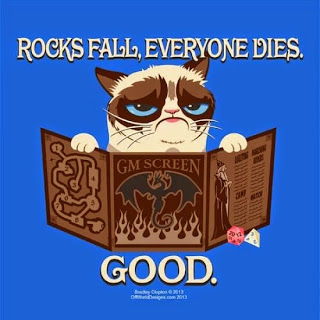 As a story goes on one is forced to make certain decisions and it is such decisions that can make or break the tale as told. True, a bland story can be carried by excellent writing or setting, but really it\’s about the characters and the actions they take regardless of where they take those actions or how they are described.

In the last post I did (whoa, two in a month!) I talked a small bit about my campaign for The One Ring RPG and that has presented me with harder decisions than any story I\’ve written in recent memory. In part that is because I am assimilating characters and story and setting elements that are not my own: the (rather good) prewritten adventures by the publisher; my players\’ characters; the entire world of Middle-earth that, as much as I identify with and enjoy, is not mine to toy with as I please. So what kind of context do I sit my players in? Do I/should I force them down certain paths for the sake of the narrative? How will I use the setting and use it properly? How will the players react?

It\’s that last question that I want to spend a moment on because it is important. Thinking about this group of four players, good friends and lovely people (one especially lovely; so much so that I married her some years ago) and the immediacy of the feedback they can provide is a major consideration in casting a session, or entire campaign. If things go in a direction they do not like or were not expecting it should have no small amount of payoff if I am expecting them to trust me and let me have my way (even if they themselves lead things in that direction).

This series of ideas led me to its application to writing stories. My players are like readers (even if they are co-writers as well) and that informs the decision making I mentioned before. The differential is vast — here are four people who will immediately react and are personally invested in the story already. Readers are largely anonymous and much quieter, an internet away. And yet I\’ve begun to wrestle, just recently, with how a story will be received by readers. Only in a very small way did the reader factor in to my writing in the past — either like-minded folk will find my writing and enjoy it or they won\’t.

Certainly commercial writers have to think about this but for writers with a particular vision, really with something to say (which I am not, though I hope to be), bringing the reader into the picture poses an interesting question: how much do the decisions made (characters dying, dialogue, how a conflict is resolved and why) serve the work (the story itself) and how much do they serve the reader?

Before answering that question, if it is possible, it\’s worth saying that many writers (myself included) often find that a story just comes out or \’writes itself\’. Oftentimes this is the first draft, the clay to be molded into something of better form and definition. In this case it\’s the process of revision that presents the harder questions unless something really \’feels right\’.

Writing my whole life and remaining unpublished is a genuine anxiety of mine. It would follow that the temptation to write something attuned to the bestseller crowd be present. However it isn\’t, really, and as I said I\’ve always written what I want to write and have become a better writer for it. Writing intuitively is, I feel, okay. Many of these questions resolve themselves in a natural fashion that is still interesting. Even things that really need to be thought through manifest an answer when the time comes if one sticks with it. I wonder, though, what other writers have tried and been successful with?