I recently read a thought-provoking article on race. The subject has, of course, been prevalent lately on the endless churning of Internet, but a few of the better articles have floated to the top, the scummy protein coagulating and emerging amongst the slop. It is a good read, one that flies in the faces of people who just don\’t get it.
The author draws upon a few examples of the embedded racism in our society from popular culture and that, of course, pricked a nerve for me. He says: “Racism is our acceptance of an all white Lord of the Rings cast because of historical accuracy, ignoring the fact that this is a world with an entirely fictionalized history.” 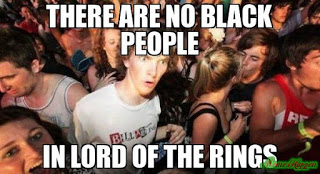 The linked Yahoo! article actually has some of the standard answers that I will refer to but for some that is not enough, and I get it.
First, the Fellowship is about people of varying races banding together to stop evil. Issues of conflict and tension between races is directly addressed in the relationship of Legolas and Gimli. As the two interact, travel, and suffer together they learn that they have quite a lot in a common and that their differences can actually be appreciated by the other (cf. their discussion on the Glittering Caves in the Flotsam and Jetsam chapter).
Additionally it belies some of the “magic” of the books. I’ve written some on how Pat Rothfuss called it “scary” that nobody really realizes that there are no female characters in The Hobbit. I call it a good story. Surely some female readers noticed it and maybe it affected their reception of the book, however few people notice it because it’s not a book about gender. It’s a fantastical adventure. Perhaps some of the same can be said about Rings: you may not notice all the white people or, if you do, you don’t care because you’re swept up in the tale.
Tolkien also began his work as a mythological cycle to fill in the gap he believed to exist in English folklore. Any of the stories already present were either too foreign (Arthur) or not rich enough (faerie traditions being more flimsy and rooted in Germanic legend). So he wanted something that would of course be influenced by other northern European cultures but was specifically English. The Book of Lost Tales addresses this as it describes early incarnations of the mythology beginning with the discovery of the Lonely Isle by an Englishman. To be blunt, we would not expect many (if any) people of color in an ancient northern European setting. Nor would we expect many white people to appear in African legends (cf Imaro)

A white dwarf and a white elf are still white. I understand that. However a book is also a book; part of the reading process is the participation in the art form. In a sense, readers complete the work by their consumption of and interaction with the text. I can’t speak to readers of any particular color besides my own, whether they imagine certain characters to look like them or something else. It is up to the reader.
A film is a bit different. The quote above seems to question the movies more specifically, as he talks about the “cast”, so we move there now. We all know PJ is not afraid to introduce elements of his own interpretation so, why not cast some Black actors?
You can’t be what you can’t see. I’m pretty sure Avery Brooks taught me that. He said part of his reason for becoming Captain Sisko (the first starring black captain of Star Trek) was so that young Black kids could see that they’re included too; you don’t have to be white to be a captain.
So perhaps it would not have been beyond the bounds of cinematic application to have, say, a black Dwarf or even a black Man (a Gondorian, maybe?). Even if you drag in the fact that it was shot in New Zealand (how many black actors are there in NZ?) they could have still used some of the Maori actors in roles that weren’t orc-related. Maybe they did, but I didn’t see any.
The fact that Lake-town in the recent Hobbit films was rather diverse drew some suspicious eyebrows from the Tolkien diehards. Even if that score did have a plausible internal rationale (Esgaroth was far to the East and a trade hub, attracting folks from all over) why should it be a big deal that there are black extras in the shot when the film has already taken so many liberties?
So I suppose I am of two minds. On the one hand, it is perfectly reasonable for there to be few or no people of color in the north of Middle-earth (where the vast majority of the action takes place) but at the same time the inclusion of BIPOC, especially in the cast of the film versions and especially as extras, would have been nice. For now I expect I will leave it to the experts.