The Lord of the Rings Online has been something like medicine during this lockdown. I’ve been working on a new game, and pecking away at the HOMES sequel (I think I’m up to a chapter a year!). But moreso I’ve been allowing myself a vacation in Middle-earth. If you’re not interested in LOTRO or gaming en masse, this post isn’t for you. Still, I thought it might be fun to reflect on my time in this game and what it says about me and my life over the past 13 years. 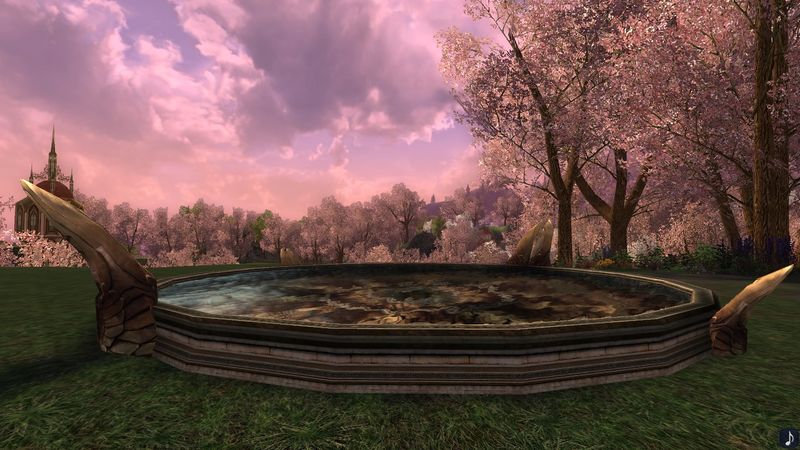 It’s hard to go back all those years ago and recall exactly what was going on. I was newly married, which is its own adjustment, and playing lots of games. I recall ending my relationship with WoW just before Burning Crusade hit. EVE Online was in there somewhere, as was this canceled game about doing tasks on a space station…
Anyways, somewhere along the line I found out about the beta test for The Lord of the Rings Online. Hell, I like MMOs and The Lord of the Rings! I thought. Why not?
My memory here is also shaky. I recall making a Dwarf Guardian and smacking some things around in the Vale of Thrain. The game didn’t run with especial smoothness on my machine. It didn’t stick some how. It was just another WoW clone with Tolkien’s skin on it. Maybe I was still hungover from obsessing over World of Warcraft. There were of course other circumstances outside my gaming life that factor in, but I think that even if things were calmer or easier I probably would not have stuck with LOTRO. Who can say? I was in my early 20s and foolish and didn’t know what I wanted. Now I’m in my mid-30s and foolish and I still don’t know what I want.

Thankfully I still actively use the email account with which I signed up for LOTRO. I have the beta notices. I also have a “Welcome Back” email from April 2008 and that’s when my LOTRO journey began in earnest.
Who knows why? I go through phases of wonder with Tolkien’s stuff, so maybe I was re-reading Rings and decided to give this old goat another shot. Maybe it was the impending release of the first expansion, The Mines of Moria. All I know is that I was stuck in at this point. I made and deleted bushels of characters, found my first real kinship (the members of which I still keep in touch with today), and decided on a main – a dwarf minstrel. I also leveled them all, apparently. By the time this stint with LOTRO stopped I’d have at least 6 characters at level 65 or higher.
It was also at this point that I discovered how deeply I care about the character part of these games. This is the main reason I made so many alts (alternate characters); I’d have an idea for that person in Middle-earth and would call them to being. Then I’d take that person on adventures, realize I didn’t want them around any more or that their journey was complete or being superseded by another and *poof* they were gone. It was a time sink and a helluva lot of fun.
How did my wife put up with this? Well, she joined me.
And this is how nuts I was at that time: I started leveling a Warden with my wife, decided I didn’t like the Warden, and leveled a Champ all the way up instead. This is on top of a max level Guardian, Minstrel, and Burglar. Folks, I was stuck in. And it was fun! Especially after my wife started playing with me. Jumping on for an hour or two a night, with a good kin, was just as fun as chilling out and watching TV or any other “normal” thing couples do.
Then came the babies. In 2011 my first darling baby girl was born. We were still able to play after bedtime, but it appears my LOTRO time began to drop off in 2013. Besides life in general, this is about the time that I got really into tabletop gaming. LOTRO began to feel like a grind instead of an epic journey to save Middle-earth. That’s a real pitfall with games like this. Repetitive actions wrapped in epic armor are still repetitive and if you’re looking for something more dynamic you may need to look elsewhere. And so in November of 2013, around the release of the Helm’s Deep expansion, we canceled our subs.

We popped by again in 2015 when LOTRO changed hands from Turbine to Standing Stone Games. Our old kinmates were out and about on Facebook so we would hear from them on occasion, and when it became clear that the game was changing developers and and that servers were closing, we thought it a fine time to log in and choose our new forever homes.
This is a weird sidenote because I made a few logical decisions in the process, and one oddball. Most of my characters went to Landroval, my home away from Elendilmir. I knew some people on there, knew it to be active, and to have a decent roleplaying scene. So most of my army of alts wound up there. Our largely inactive kinship moved to Arkenstone so my main character moved there. And for some reason I moved my high level Warden to Gladden. Why? I have no idea. Maybe there was a kin I was interested in. Maybe I had high hopes of being active on multiple servers.
Then the game went dormant again until about three years ago. The itch came back hard. The epic story was at an interesting point. There were Beornings to try. So that’s what I did!
I leveled my now-main character up, used the Aria of the Valar to skip ahead about 50 levels, and got into Gondor at long last. I was not in the mood to level a whole other character up and getting to 95 meant I was skipping to exactly where I needed to be, having stopped at Helm’s Deep with my other characters.
Gondor was simply stunning and beautiful, but I distinctly recall having this thought “OMFG another quest?!” I fell into the classic trap. Either you buy into games like this and enjoy, or you feel like a slave to the grind. Break any game (or most activity, really) down in that way and you can feel like  a slave. To the mechanics, the repetition, take your pick. At that point that’s what I was: locked into an ever-grinding wheel of quests.
It didn’t help that I was a published author and game designer at this point, with Heavy Metal Thunder Mouse on the horizon. There were badder fish to fry.
So once again I shut it down.

Who knows why Middle-earth came a’calling this go around? Who really cares. As I’ve said, I can let gaming be the place where I cave to my impulses. If I want to play the game, I’m going to play it. This time I feel like I have buy-in as I hadn’t before. Previously I felt my time was 70% about leveling up and playing the game as a game. Now I feel like that majority percentage is spent enjoying being in Middle-earth. The game has plenty of flaws and irritations to point at, but ultimately I’m able to achieve what I want to achieve: spending time in a beloved fictional world well-realized.
I will say, as an addendum, that this game is like a weird therapeutic exercise. There are moments where I realize the game is becoming stressful and causing me anxiety. Upon reflection, I see that this is because I’m asking the game to be something it’s not. Either I make it about completion, and doing absolutely everything, or I make it into a true Middle-earth resort. This struck me hard yesterday when I found myself making another character on another server for a roleplay event that I will probably never have time to attend, and if I did it would not meet my expectations.
Other games have a start and an end. MMOs do not. So if I don’t keep this game under proper perspective (that is, mostly sticking to one character and accepting the hard reality that I will not be able to max out multiple characters any more) then it truly becomes like a job. And I think that’s where a lot of people involved with various games hit the wall: it’s a game and it can’t be more than that and you’re not the developer so you can’t make it perfect.
Two other thoughts that came to mind upon reflection. One is that I find I often get frustrated with games when I seek depth and meaning, because it’s just not there. Also there’s sometimes that feeling that says I have to get everything done right now and that’s a sure fire path to burnout.
In any case, I find this type of thing interesting to think about. All of our issues are not left at the doorstep when we jump into our hobbies.